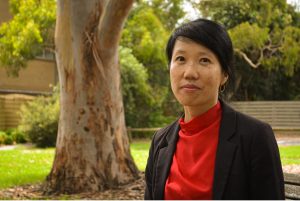 Belinda Lo says funding for family violence services will be a vote-changer for some people.(ABC News: Matthew Doran)

Wandering the streets of Melbourne’s Box Hill on Lunar New Year, it was clear something was not right in the usually bustling and vibrant slice of suburbia.

It would usually be a struggle to get a table in one of Mr Zheng’s restaurants around lunchtime.

But as we took a seat and pored over the enticing menu, he was obviously worried about how he could keep his kitchens running.

“Now out of lockdown, but with case numbers so high, it’s still very difficult in terms of finding staff that want to work in this kind of environment,” he said.

Chisholm an electorate to watch

Lunar New Year is a time of renewal and hope, when wishes for good health and prosperity are spread through the community.

But COVID-19 continues to cast a long shadow over Australia and it has forced the cancellation or postponement of most large-scale Lunar New Year celebrations on health and safety grounds.

It has also brought a number of perennial election issues into even sharper focus, with leaders under pressure to outline their vision and, more importantly, plans for rebuilding a fatigued and frustrated country.

2022 is the Year of the Tiger — an animal symbolising strength, power and leadership — traits the nation’s leaders will be hoping the public see in them during the campaign.

Mr Shi insisted there was a role for all governments to play in providing support for small businesses.

“We live in Australia, we live in Victoria, we do business in the City of Whitehorse,” he said.

“I think it’s a team effort, and there just needs to be some help for the small guys.

“We can’t just hand out money, I understand that, but you know there has to be some type of middle ground.”

While the empty shopfronts and streets tell the tale of the economic cost of the pandemic, the social toll has also been high.

“When lockdowns were slightly eased, there was a huge increase of demand on our services, particularly for our family violence and elder abuse victim survivors,” Belinda Lo, from the Eastern Community Legal Centre, said.

In two decades of practice, Ms Lo has seen a dramatic shift in the national conversation around family violence and the treatment of women — particularly in the last year, since allegations of a toxic culture in Parliament House brought the issue into direct sight of political leaders.

However, she is not convinced real solutions are on the table.

“I think people are well meaning, but it can appear to be very knee jerk sometimes,” she said.

Chisholm, while hotly contested, is just one of 151 House of Representatives electorates up for grabs. Almost a third of those seats are on a margin of less than 6 per cent.

With a surging real estate market and rental shortages, the search for affordable housing is hitting most corners of the country.

In the Brisbane electorate of Griffith, held by Labor’s Terri Butler on a margin of 2.9 per cent, Noam O’Reilly is among the young renters battling it out for a place to call home.

“I’ve been a renter for 10 years now, and during that 10 years I’ve lived in nine different places,” they said.

Mx O’Reilly has lost their job in the arts sector during the pandemic and has gone back to university to study law.

Juggling work, study and house hunting is proving a challenge.

“You’re trying to go to as many inspections as you possibly can, and when you’re at those inspections, there are large groups of people going through — between 50 and 100 people seeing the property at one viewing,” they said.

“You’re overhearing conversations where people are offering to pay three months’ rent in advance or hundreds of dollars over the weekly asking price just to secure a property.”

While searching for a house, she is also seeking for policies to help people in a similar position.

“I think there’s probably a problem with how we’re discussing housing affordability and the divide that’s created; the us versus them, landlords versus tenants, millennials versus boomers,” they said.

Tasmania’s picturesque Tamar Valley feels a world away from pandemic-ravaged parts of the country. The lush, rolling valleys are coveted by locals, tourists and politicians alike.

The electorate of Bass covers much of the north-east corner of the state, and is the most marginal in the state with a buffer of only 0.4 per cent for the incumbent Liberal party.

Local winemaker David Feldheim said strong leadership was necessary to get the country out of its COVID-19 slump, but warned matters unrelated to the virus needed to be addressed.

Smoke from recent major bushfires in Tasmania and further afield in recent years has damaged his grapes.

“It’s just shocking, the complete lack of response to the bushfire, and the whole odour of climate change, which I see as a farmer on the front line,” he said.

Mr Feldheim said his wife’s family had been making wine for generations, but his children might struggle to continue the tradition without proper action on climate.

You can read the original story here